Hiking on a Gorgeous Fall Day


Abram and I enjoy hiking.  We have made it a point to walk or hike several miles each weekend since our biking accident in August.  Up until October 21st, none of our children would join us.  I decide to insist Carmen and Rachel come "walking in the woods" with us.  Sarai was working that day so she couldn't come.

Here is the image of the fall leaves at the beginning of our trail.  We planned on hiking up Mt. Wachusett. Rachel and Carmen were very silly walking.  Rachel found a stump which she called a chair, but decided to stand on. 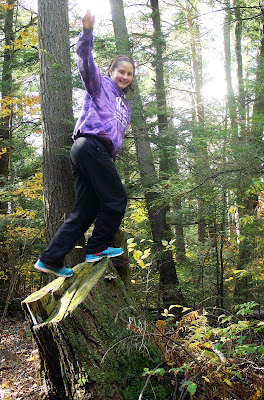 Here is a root base of a tree that had fallen over. 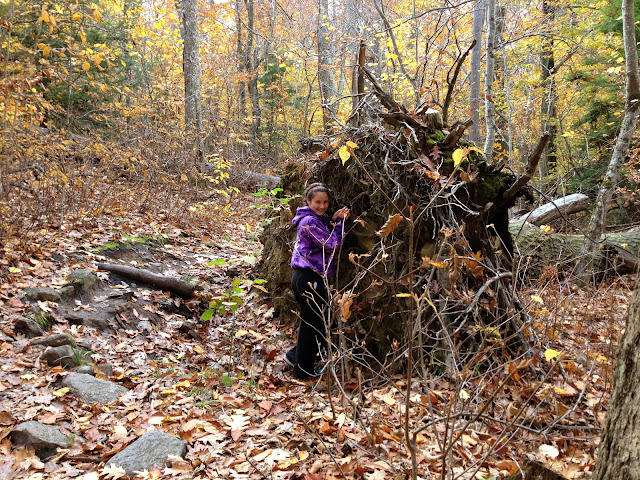 Rachel discovered a great walking stick and used it for some of the hike. 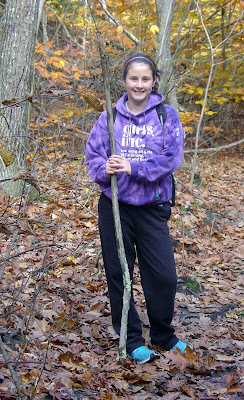 We took two bags with us.  One was a hydro-pack with water and the other a small back pack with food.  I found it humorous that Carmen would only carry the backpack, she was too embarrassed to carry the hydro-pack and Rachel was the opposite.  She only would carry the hydro-pack.  She thinks it is so cool to drink the water from the tube. 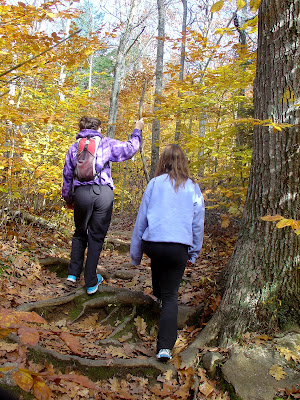 So as we hiked I had to carry either the hydro-pack or the backpack as the two girls couldn't switch off.

When we began our hike/walk Rachel kept asking "where are the rocks?"  I promised her that the rocks will come as we get closer to the top of the mountain. Here are some good climbing rocks for Rachel. 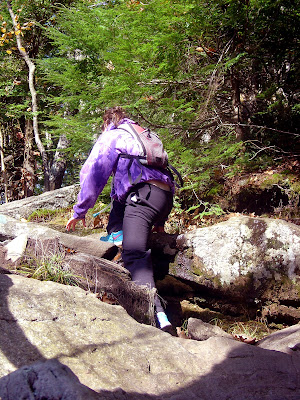 She found a great rock to hide under as well. 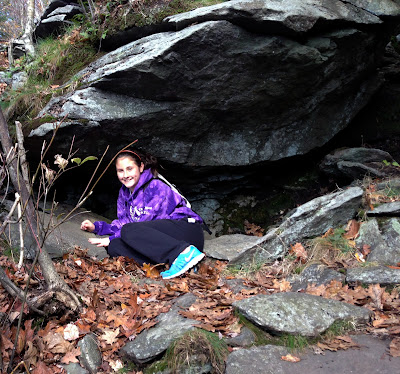 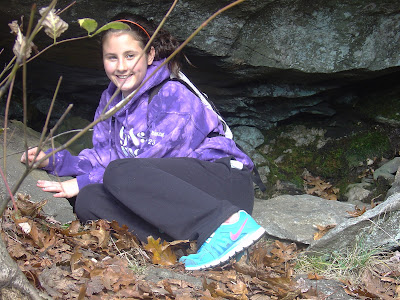 And others to look so pretty on. 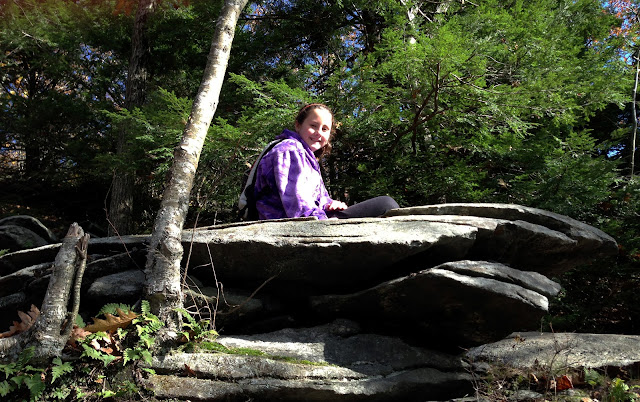 Abram and Rachel at the top.  Carmen has become too much of teen to offer me good smiles so we don't have many of her on this hike. 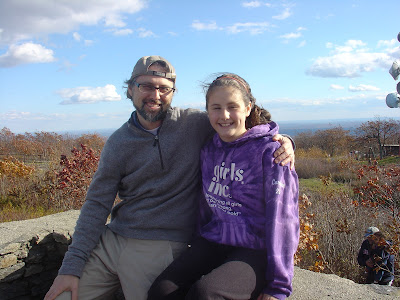 She took this picture of us at the summit. 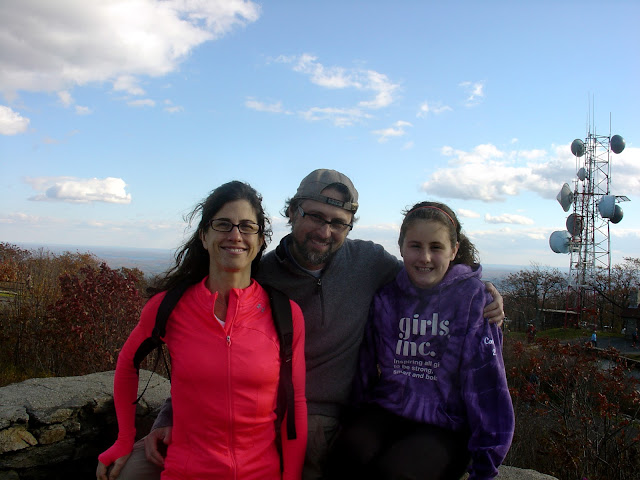 Then one of herself! 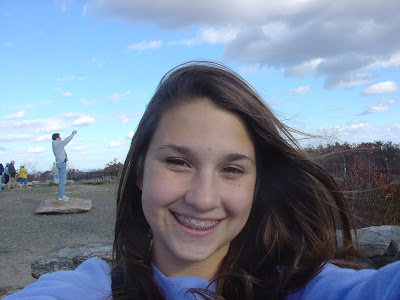 Abram used his long arm to get all of us.  We did enjoy the hike.  Rachel and Carmen kept us walking fast at the end.  I did promise them ice cream when we finished (which we did get).  I was so cold that my lips turned purple though! 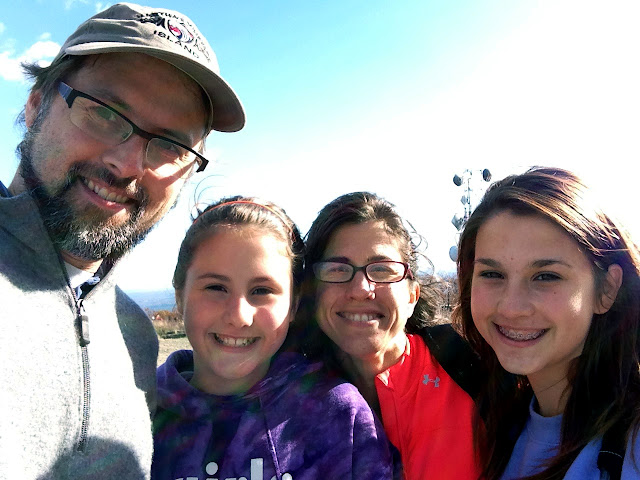 Posted by Unknown at 7:49 PM No comments:

It has been so long since I posted last.  So much has happened.  I will try to keep up to date posts as well as ones from the past several months.

I have always had the idea that the study would show case the kids art. A few years ago Abram bought me a matte cutting board and equipment to create my own mattes. Art paper is never standard and it is "easier" to make your own matte to fit a certain sized frame. I made two such matted pictured with frames, but stopped at that years ago. Two weekends ago, we rediscovered many of the kids art work that I had always wanted to frame. With Abram's help we added many frames to our study as well as other areas of the house.

From left to right:
Two pictures of Tobin.  A friend of Tobin's sketched his senior picture as a graduation gift for him.  I placed it with Tobin's self portrait from 9th grade.  Tobin's portrait is made from magazine clippings using positive and negative space.  It was on display for parent's night at the HS.  I knew it was him immediately.
Center is pointillism of my dress shoes done by Sarai
Right is is water color done by Sarai. 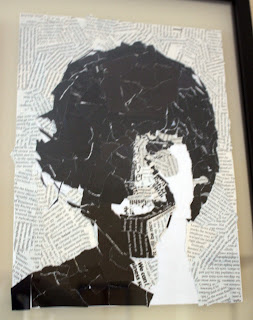 Here is a closer look at the portrait Tobin created. 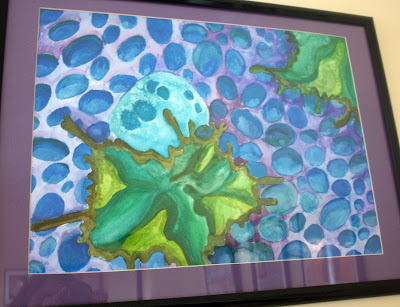 This is the water color painting.  I believe it is of a microscopic organism. 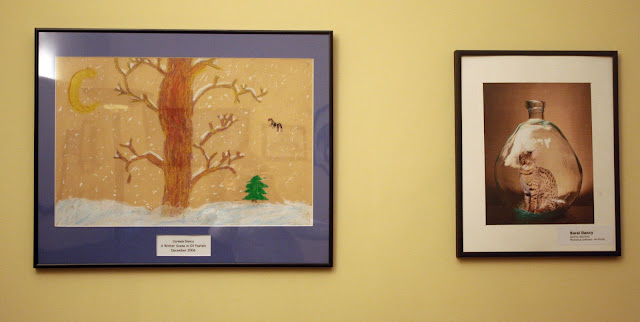 Left is a picture done by Carmen if Rudolf flying in the winter sky.  She did it in 2nd grade.  This was one of first pictures I matted on my own.
Right picture is a digital image of a cat in a bottle by Sarai 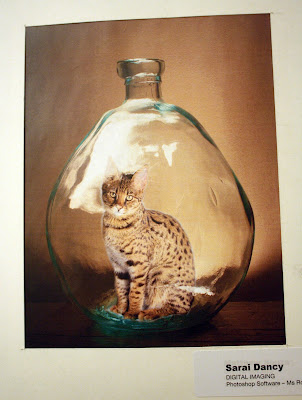 A closer look at the cat in a bottle.

This is now the wall the couch back is against.  the top two pictures are done by Sarai.  the flower she did in 5th grade and the fruit and bottle was done last spring.  both are done in oil pastels. The bottom two are done by Rachel.  I believe the bottom left was done when she was in 1st or second grade and the shapes are either from 4th or fifth grade.  The large picture on the right is also done by Rachel.  Another one of the first I matted.  I think it was done in 2nd grade.

The next three pictures are now in my entry way closest to the garage (for those who have been in my house). 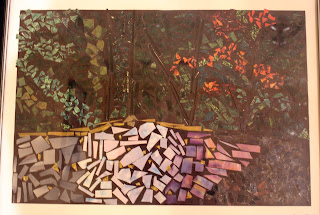 This is a mosiac done by Carmen from 8th grade. 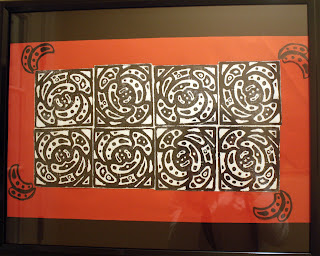 This is done by Sarai from her print making class.  They had to carve into Styrofoam  ink it and make multiple prints to create a design. 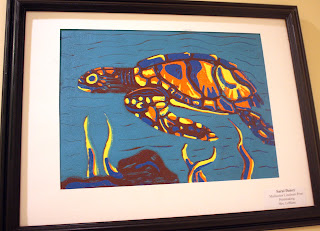 Also, in that same print making class she created this see turtle.  This picture was entered into the Boston Globe art exhibit winning an honorable mention.


Abram purchased a poster in Spain.  It is a Picasso of a bull fighter.  He now greets all that come down our stairs or enter through the main entrance door. 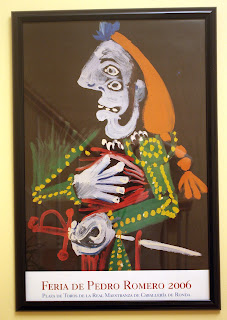 In 2004 we took a family vacation out to the west coast.  While we visited the Seattle Children's museum Carmen spent almost two hours in the art room.  We learned to use oil pastels in a bucket of warm water.  Using water color paper, she was able to draw and erase anything she did not like before it became permanent.  the oil pastels did not penetrate the paper until the paper dried.  Here is her mermaid that she did the week she turned 6.  She still loves this picture.  It is now in my bathroom. 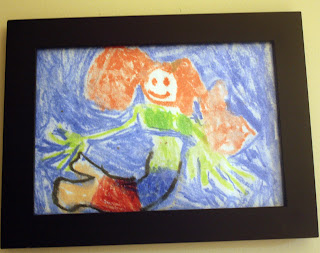 There is still more art to frame!

I also began an adventure wall in the living room.  I need to find pictures from all the state parks we have visited as well as great family pictures and ones of Abram and I being outdoors.  Hopefully, many more blogs to come.

Posted by Unknown at 9:10 PM No comments: 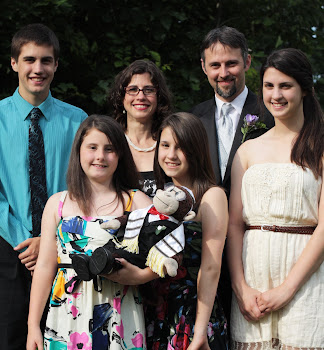